In South India especially Kerala, the Onam festival is celebrated in grandeur. It is the time of the year when Kerala is exhilarated with music, songs, dances, sadya along with huge events of boat rides and delicious Onasadya. While the festivities started on August 30 itself, Onam will see its biggest celebrations on September 8. Traditionally speaking, the festival falls in the month of Chingam according to the Malayalam calendar.  The 10-day-long affair is celebrated with music, feasting, and boat races in the backwater of Kerala. On the last day, people prepare Onasadya and the giant feast is savoured with family. According to Hindu Mythology, the sage Prahlada had a grandson named Mahabali. He took over the three worlds by defeating the Gods (Devas).

Then the Gods approached Lord Vishnu to help them in the battle against Mahabali, Vishnu refused considering Mahabali being a good ruler and his devotee.

The king offered everything to the boy but he was adamant on seeking three-paces. Mahabali, although surprised by the boy’s wish, agreed to grant it.

This made all the other gods feel threatened and sought help from Lord Vishnu, who then appeared as Vamana and tricked the king into giving back all the land he owned on Earth. Onam: Wishes to send to your family and friends:

Happy Onam!! May Lord Mahabali bring happiness and prosperity to your life.

On this festive day, I wish you a wonderful Onam. May your house be filled with joy, happiness, and peace. Happy Onam! A swinging ceremony is performed on Thiru Onam, in which a swing is slung on the high branch of a tree. On the third day, people invite their friends and family and celebrate Onam Sadya. They cook 13 dishes including rice, avial, curd and payasam and serve it on a fresh banana leave.

Vallamkali or the snake boat race is organized in Alappuzha. Boats are decorated and at least seven drums participate in the race.

On the ninth day of Onam, the families give vegetables and coconut oil as gifts to the eldest members of the family which is called Karanavar.

On the last day of Onam, various cultural activities are held in temples and religious places.

Family members wake up early in the morning and wear new traditional clothes and worship the Thrikkakara appam or Vaman Vishnu Idols. Women then make different Pookkalam or floral rangoli on the east side of their homes. They also light lamps and sing Onam songs to welcome King Mahabali. 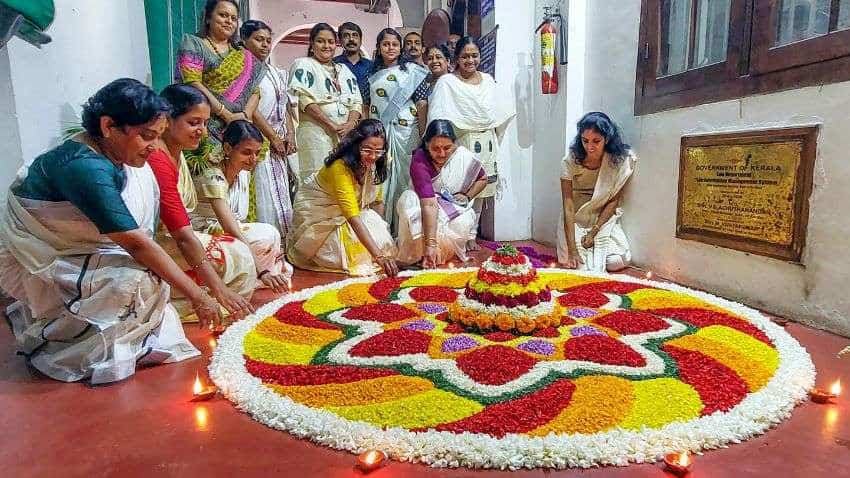 According to Muhurta Panchang, Thiruvonam Nakshatra begins at 4:00 pm on September 7 and will end at 01:46 pm on September 8. Based on the Hindu calendar, this day will be Trayodashi Tithi of Shulka Paksha of Bhadrapada