NASA and AI Space Factory developed LIN (Lunar Infrastructure Asset), an in-situ 3-printed outpost to protect astronauts and critical missions on the Moon. The project is part of the Relevant Environment Additive Construction Technology (REACT), a multi-year collaboration to develop technologies for lunar surface constructions within the timeframe of the Artemis Mission: humankind’s return to the Moon. LINA is a step in the effort to expand civilization to Earth’s natural satellite and explore it in a sustainable way that minimizes human disturbance. 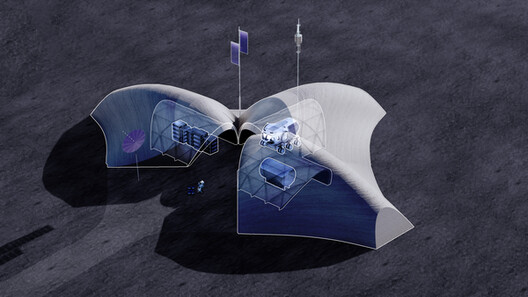 LINA is extensible from a single structure to a cluster of units, becoming a more significant and systemic lunar outpost. With an occupiable floor area of 75 square meters (each unit) and a central staging area of 90 square meters, is expected to host the astronauts sent to the Moon within the next decade. It is designed with a life expectancy of at least 50 years and will protect astronauts against hazards such as solar particle events, moonquakes, impacts, and cryogenic conditions experienced during the lunar night.

The structure is sited in the Lunar South Pole, described as “The Peak of Eternal Light.” There, the sun is nearly omnipresent, ideal for solar power generation, and the permanently shadowed low-lying regions believed to contain water that might support water harvesting operations. The structure incorporates three separate units that share a communal courtyard and integrates a photovoltaic tree to directly capture and harvest solar energy. The orientation of LINA provides self-shading, thereby leveraging topographical features in the lunar landscape to shield it from lethal solar and cosmic radiation.