Ishan Kishan smashed the fastest double hundred in history of ODI cricket to fire India to a massive 409 for 8 against Bangladesh in third and final match. Put in to bat, Kishan, who came into the side in place of an injured Rohit Sharma, blasted 210 off 131 balls for his maiden ODI hundred. He hit 24 fours and 10 maximums. Virat Kohli (113) also slammed his first ODI hundred since August 2019 but India lost few quick wickets to slip to 344 for 5. Washington Sundar (37) then took the team past the 400-mark.

Ishan Kishan became the seventh batter in the world to achieve the feat and fourth from India after Sachin Tendulkar, Rohit Sharma and Virender Sehwag

Young India batter Ishan Kishan raced away to a record-smashing knock in the third and final ODI match of the series against Bangladesh at the Zahur Ahmed Chowdhury Stadium in Chattogram as he notched up a double century off just 126 balls. He became the seventh batter in the world to achieve the feat and fourth from India after Sachin Tendulkar, Rohit Sharma and Virender Sehwag.

Ishan was never the first-choice player for India’s playing XI. However, regular skipper Rohit Sharma’s thumb injury in the second ODI, which ruled him out of the third match, opened an opportunity for the youngster and he grabbed it with both hands with hope of making a case for himself for the 2023 ODI World Cup. Ishan Kishan got to his double-century in just 126 balls

While also becoming the youngest to get a double, Kishan overshadowed Virat Kohli’s 91-ball 113, as India took Bangladesh bowlers to the cleaners in the final game of the three-match series.Opening the batting in the absence of injured skipper Rohit Sharma, the 24-year-old left-hander grabbed the opportunity with both hands, and reached the double hundred in 126 balls, quicker than anyone else in this format.The West Indies’ Chris Gayle held the previous record with his 138-ball double ton against Zimbabwe in 2015.

That’s the way to do it. Brilliant from Ishan Kishan. This is the approach that will do Team India a world of good. #INDvsBAN pic.twitter.com/PepchFwFF1

This was India’s fourth highest ODI total, even as the run-rate slowed down after the departure of Kishan and Kohli.From 339/3 in 40 overs, India managed just 70 runs in the last 10 overs while losing five wickets.Having completed his maiden ODI century in 85 balls, Kishan batted in T20 mode as records kept on tumbling. That 156 of his runs came in sixes and boundaries (10×6, 24×4) tells a lot about the relentless assault he’d unleashed on the Bangladeshi bowlers.Also, the Jharkhand batter became the fourth Indian, and seventh overall, to reach the milestone when he scored a single off Mustafizur Rahman in the 35th over.At the other end, Kohli was at his sublime best en route to his 44th ODI century, and 72nd overall, as the duo bossed the innings with a 290-run partnership off just 190 balls.

Having scored his maiden T20I hundred earlier this year, against Afghanistan in the Asia Cup, Kohli recorded his first ODI ton in more than three years. 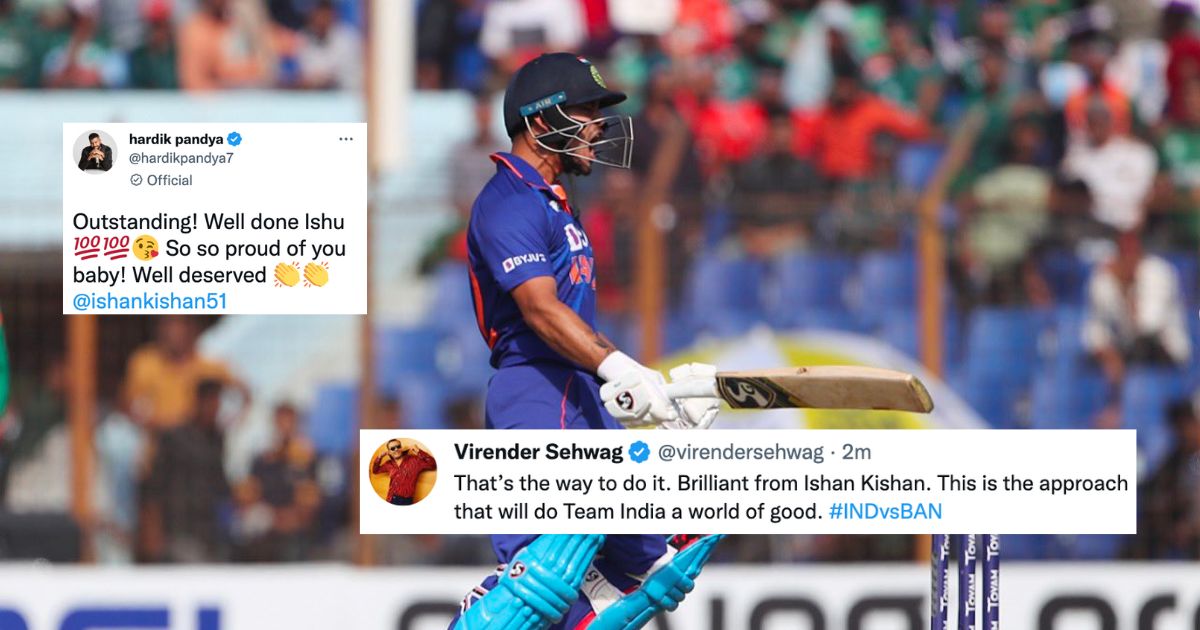 In a reminder of the famous six off Haris Rauf in the T20 World Cup, he picked a back-of-a-length delivery from Ebadot Hossain for a six to reach his century in 86 balls.Having already conceded the three-match series after losing the first two ODIs following ordinary batting, India under KL Rahul brought in Kishan to open with the struggling Shikhar Dhawan.Their opening partnership lasted 4.1 overs as Mehidy Hasan trapped Dhawan lbw for three.

The off-spinner nearly had Kohli when he drove straight to short midwicket, but skipper Litton Das dropped him on six.Thereafter, it was a one-way traffic for India as Kishan smashed the Bangladesh bowling with his explosive batting.Dealing mostly in boundaries, the diminutive batter relished the short-pitched stuff and looked in total control on both sides of the wicket.Kohli performed the bhangra before hugging the youngster after he reached his double century.