The Delhi acid attack case has shaken the entire nation today. A 17-year-old girl was attacked with acid in Delhi’s Dwarka when she was on her way home from school. The girl was accompanied by her younger sister when two bike riders threw acid on her. This incident has once again given sleepless nights to people. At the same time, actress Kangana Ranot has reacted on the acid attack case of Delhi.

Kangana’s elder sister Rangoli Chandel has also suffered this terrible pain. In such a situation, the Delhi incident has brought back painful memories of Kangana’s sister Rangoli’s acid attack.

Kangana expressed the pain of acid attack on social media

Kangana Ranot is always seen giving her opinion on every issue. In such a situation, how could Delhi stop itself from reacting to the acid attack case. Sharing a long post on her Instagram story, Kangana brought back the horrific and painful memories of the acid attack with sister Rangoli Chandel. Kangana wrote in her post, ‘When I was a teenager, my sister Rangoli Chandel was attacked with acid by street gang Romeo.

… After this he had to undergo 52 surgeries, no one can imagine the mental and physical trauma he had to go through. Our whole family was devastated… I even had to go through therapy at that point, because I was afraid that anyone passing by might throw acid at me, which is why every time a biker, a car, If a stranger used to pass by me, I used to cover my face. 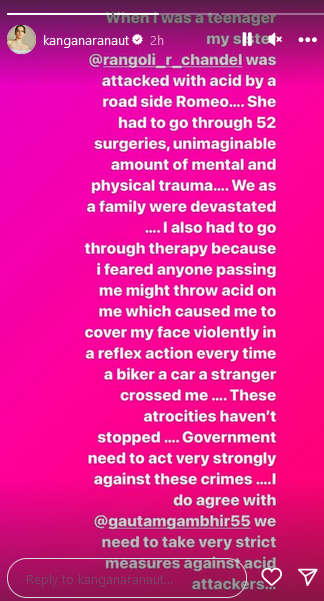 Strict action needs to be taken against these crimes.

Kangana Ranot has written in this note to take serious and strict action from the government. Kangana wrote, ‘These atrocities have not stopped yet… The government needs to take very strong action against these crimes… I agree with Gautam Gambhir. We need to take very strict action against acid attackers. This post of Kangana is becoming increasingly viral on social media.