Bharat Jodo Yatra led by Congress leader Rahul Gandhi has reached Delhi in the early hours of Saturday. Former Congress President Sonia Gandhi and Priyanka Gandhi also participated in this visit. The journey has currently reached Jairam Ashram. Famous film actor Kamal Haasan will also join Rahul in this journey. The yatra will also reach the National Memorial in a short while.

This yatra of Rahul Gandhi will also pass through Nizamuddin Dargah. After this, at 4:30, Rahul will address the public meeting at Red Fort. Between 5 to 6 in the evening, Rahul Gandhi will reach Raj Ghat, Veer Bhoomi and Shaktisthal.

A large number of Congress workers, led by Delhi unit chief Anil Chaudhary, welcomed Rahul Gandhi and the yatris at the Delhi border at Badarpur. The yatra has entered Delhi from Faridabad side in Haryana. 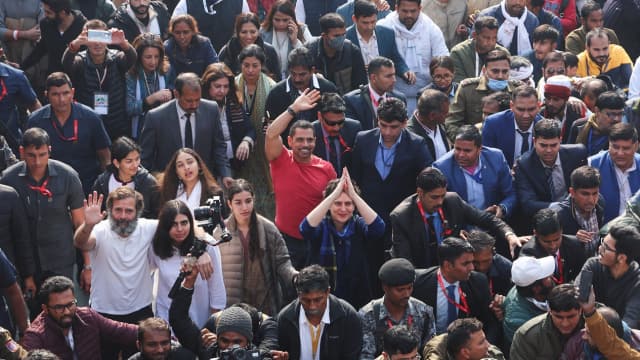 Former Haryana Chief Minister Bhupinder Singh Hooda, Kumari Selja, Randeep Surjewala, Shaktisinh Gohil and other senior leaders have participated in this visit. During this, it was said from the Congress side that inflation, unemployment and hatred should be removed. With this voice of India, we have come to the throne of the king, we have come to Delhi. Come join us in raising it even higher. How far will the journey go in Delhi

Congress leader Jairam Ramesh had earlier tweeted that the Bharat Jodo Yatra is entering its 108th day in Delhi. He said that for the last few days, uneasiness has increased there. The yatra will halt at Ashram Chowk in the national capital at 11 am and will resume at 1 pm.

Avoid these routes going to railway station and airport

Due to the tussle between Delhi Police and Congress, there is a possibility of deteriorating traffic system in half of Delhi since Saturday morning. In such a situation, people may have to face traffic jams on various roads from Badarpur to Red Fort. In such a situation, people going towards the railway station and airport may have to face trouble.